“Addiction is the opposite of connection,” said Damien Browning, a former addict and the executive director of Steps to Recovery.

It is one of his favorite mantras and the animating philosophy behind the Cottonwood-based addiction recovery and housing program. In Browning’s view, the problem is often less the drugs than the environmental factors that lead to a person using, and the way to help them overcome their demons is to help them find connections and meaning in a community.

So the pandemic and lockdowns of the spring 2020 meant a new challenge for the program. With some of the clients suffering from compromised immune systems, the sober living home locked down early, before official shutdown orders.

The 14 residents of the home were stuck with just each other and unable to go out, also losing many of the counseling and job training features of the recovery program. The Miracles Happen resale store that provides much of the funding for the program as well as employment for many of the former addicts had to lay off most of its staff.

“There was some depression. There was a lot of fear, not knowing what was going to happen, when it was going to end,“ said Anji Dickson, a manager at the store and former addict who went through the program herself. Dickson said that without the job that had given her life structure, the temptation to relapse was powerful. “For most addicts — I know for myself — idle hands are [the devil’s playthings] …. Being by myself all the time was tough.”

But facing the challenge, the program also sought to find new solutions, to build new connections to fight addiction. Steps to Recovery partnered with the Northern Arizona Healthcare Foundation and Tribe Wellness in Sedona to provide their clients with telemedicine and remote counseling. But they also started holding their own 12-step meetings outside together in the yard. Browning bought sports and games equipment for the people at the home, as well as food to cook together and make meals inside for those who could not leave.

“We were actually blessed by them being able to have a community, because a lot of people — especially our older population — haven’t had that,” Browning said. “It was actually a blessing for our clients because they were around people. They weren’t totally isolated in a situation where they weren’t around people. Since they were around each other anyways, we kind of kept it as a group.”

“It was hard, but at the same time, it was easy, because of the support we had,” said Rafael Garcia, a recovered methamphetamine addict. Garcia, who had been in and out of prison for a total of 12 years of his life, joined the Steps to Recovery program shortly before the pandemic hit. “It wasn’t like we were just locked down and then they fed us to the wolves or kept us locked down. We found things to do as a group. Personally to me, I think the lock- down helped more in the recovery, because we were locked down with each other. We got to run our own meetings, and by running our own meetings, every- body got to share, and everybody got to know each other, rather than an open meeting, where they’re all quiet.”

During the time when the store was closed, Miracles Happen continued to accumulate used furniture from estate sales and donations, without being able to sell as much. With the recovery clients stuck inside, Dickson and Browning saw an opportunity to improve their furniture resale operation in a way they had always dreamed of — by turning it into a full refurbishment operation.

Rather than just selling old furniture, Steps to Recovery is now teaching its clients how to fully remake furniture based on the pieces that they receive. Shelves are added, legs are attached to replace broken ones, and sometimes entire pieces are cut up and put back together to fit a completely new shape and purpose. Former addicts have learned how to sand, paint, lacquer and carve to turn old pieces into brand new furniture with new aesthetics.

“Each of them did what they enjoyed the most,” Dickson said. “When we come in here, we do not feel good about ourselves at all, because all we’ve done is screwed everything up. So to be able to go in and make something — it’s very symbolic when you think about it. We took stuff that was broken. All of us that came in here were broken. And now we’re fixing things and then we’re able to able to help support them.”

The refurbishment project has transformed the resale store, which can now sell what is essentially brand new, high end furniture with unique visual style. For Garcia, who had always enjoyed art but has now risen to an assistant manager of the ware- house where he paints lavish designs on the side of new pieces of furniture, it has created a new purpose out of a time of difficult struggle.

“To actually be able to do something like this, and someone liking it, makes you want to do it more. It gets you more creative on how to mix colors and how to make something, even build something out of nothing,” Garcia said. “Being in the program, being clean — I’ve got money in my pocket, I’ve got my own place, I’m able to budget. I’m never broke, I’m not sleeping on the streets. Just waking up and coming to work, it gives me a purpose to stay clean.” 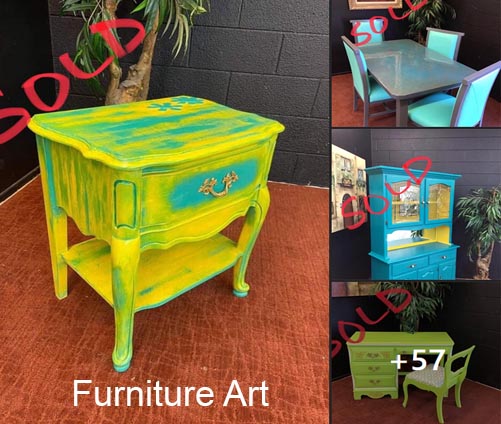